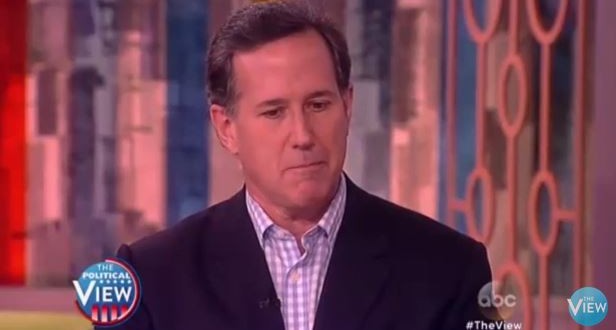 Mediaite recaps yesterday’s appearance on The View by Rick Santorum:

The View co-host Raven-Symoné, who considers herself a “part of the gay and transgender community,” was eager on Tuesday to challenge GOP presidential candidate Rick Santorum on why he remains against equal marriage rights for same-sex couples even after the issue was settled by the Supreme Court. After pausing for the several seconds of applause that followed Raven-Symoné’s simple question, Santorum delivered his usual spiel about the role of marriage in society to “form permanent bonds” between men and women in order to raise children in a stable household. Remarkably, Raven-Symoné actually succeeded in getting Santorum to admit that same-sex couples can provide a “very positive and nurturing environment” for children, an acknowledgement that would seem to undermine his underlying point.