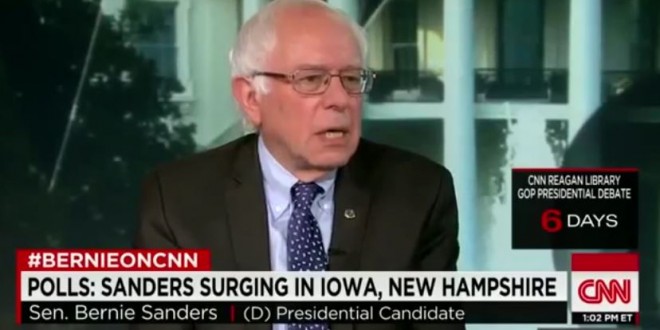 Bernie Sanders today declared that he is “stunned” to be leading Hillary Clinton in two early primary state polls.

“You want me to tell you the truth?” he asked to CNN’s Wolf Blitzer in an interview Thursday when asked about his strong showing. “Yes, I’m stunned,” Sanders said. “Look, we have a message that I believed from day one was going to resonate with the American people. … Did I think (the issues) would resonate as quickly as they have? The answer is no.” Sanders said his campaign has received contributions from more than 400,000 people with an average donation of $31.20, while eschewing raising money for super PACs. As for Clinton’s inability to move past the scandal over her use of a private email server as secretary of state, Sanders wouldn’t quite say it was hurting her standing. “I think it’s clearly not helping her,” he said. The Vermont senator, who serves as an independent in Congress and has identified as a democratic socialist, was pressed on whether he was a true Democrat. He said it’s “no secret” he’s an independent in Congress, but he has always caucused with Democrats. “I am going to be doing everything that I can to see that the Democratic Party is successful in November,” he said.

Previous Straight Outta Teabagistan
Next NORTH CAROLINA: All Magistrates In McDowell County Refuse To Officiate At Any Marriages