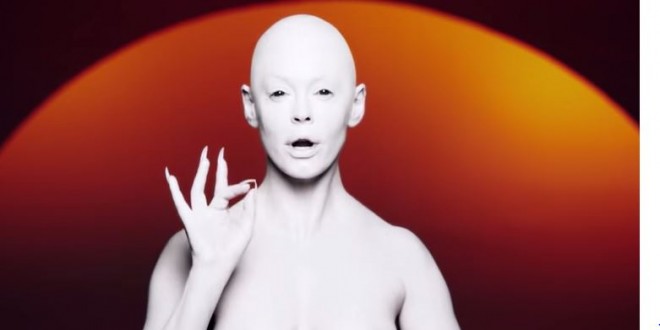 Most of you probably know Rose McGowan as one of the witches from the long-running WB series Charmed, but of late she’s been branching out into fringe-y music videos. Rolling Stone recaps the latest strangeness:

Music video vet Jonas Åkerlund (Madonna, Lady Gaga, Metallica) directed the clip, which opens with McGowan peeling layers of plaster from her body until she appears hairless, nude and ghastly white. This “Alien” character represents McGowan in her purest, most natural form, and is the first of several characters she embodies throughout the clip. In a statement, McGowan detailed her various personas: The “Dark Beauty” is a challenge to preconceived standards of beauty and misconceptions about her “goth phase,” while “Green Hair Hollywood” channels the “agitated glamor” the spotlight has inspired. The spikes of “Needles” represent McGowan’s “armor and shield,” but she’s also prone to attack as “Red Glitter Bomb.” McGowan finally presents herself as “Art,” the most powerful and raw version of her self.

Once you stop gawking at the NSFW clip, it’s actually quite a good track.

Share
Previous Tony Perkins: Muslims Have No Rights Under The United States Constitution [AUDIO]
Next OKLAHOMA: Teacher Tells Four Year-Old That Being Left-Handed Is From Satan [VIDEO]