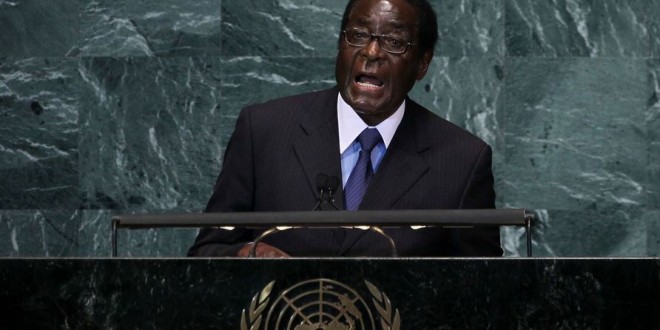 Mugabe At United Nations: We Are Not Gays [VIDEO]

Robert Mugabe, the 91-year-old leader of Zimbabwe, deviated slightly from his prepared remarks, during his Monday evening address to the United Nations General Assembly, to do something that he does frequently: slur against homosexuality. “We are not gays,” he shouted. And it’s worse than it sounds. Mugabe made the comment in the course of a point about “double-standards,” which is usually dictator code for “I’m tired of Western countries calling out my human rights abuses,” and about “new rights,” which is usually code for “I long for the days when discrimination against certain groups was considered acceptable.” Mugabe barked the line, which drew audible laughter from the attendees at the United Nations General Assembly. The Zimbabwean dictator has made overt homophobia official policy for years, and has frequently couched this in criticism of Western countries (which have sanctioned Mugabe for his appalling human rights record), sometimes saying that Western leaders wish to impose not just acceptance of LGBT rights but homosexuality itself on Zimbabweans or Africans generally.