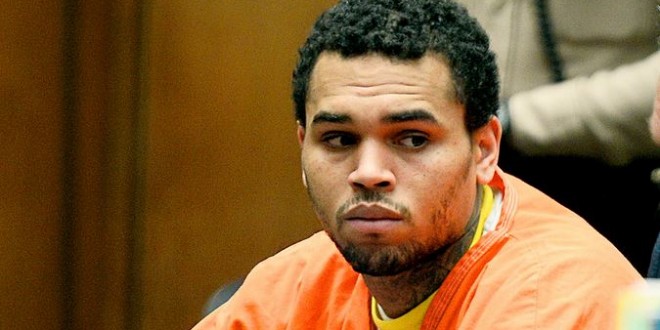 According to a report published today by the Georgia Voice, R&B star and felony-convicted domestic abuser Chris Brown failed to appear at an Atlanta Pride event because there were a handful of gay men present in the crowd of 4000 lesbians. Georgia Voice editor Darian Aaron writes:

Brown failed to show up at The Georgia Freight Depot nightclub as thousands of his fans waited to see the ‘Loyal’ singer at his scheduled Saturday appearance during Atlanta Black Gay Pride Weekend. The event, sponsored by Traxx Girls, a lesbian owned and operated entertainment company, was billed as the “biggest girl party in the country with over 4,000 women in attendance.” Brown, who was also in Atlanta to perform on his ‘One Hell of A Nite Tour’ at Aaron’s Amphitheatre at Lakewood, had been prominently displayed in the center of Traxx Girls flyers promoting the event, but when the time came for Brown to fulfill his contractual obligations he bailed along with the fee he was paid by Traxx Girls as a retainer. The reason: of the estimated 4,000 women in attendance, Brown refused to enter the building once he learned that a handful of gay men were present. Melissa Scott, party promoter and founder of Traxx Girls, tells Georgia Voice she’s “baffled” by the entire turn of events. “I think it’s unfortunate for mainstream artists to take people’s money with the complete prior knowledge of knowing what the event is and being very clear about what the event is about. I’m completely baffled. You know it’s gay pride. You knew you agreed when you sent the contract in and took the money.”

The Georgia Voice reports that it has confirmed the claims by examining the text messages exchanged between the event promoter and Brown’s handlers. Chart-topping rapper Fetty Wrap, who is touring with Brown, stepping in at the last minute as Brown’s replacement. Much more is at the link above.

RELATED: Brown was convicted of felony domestic abuse in 2009 for his assault on then-girlfriend Rihanna. In 2013 Brown was involved in an parking space incident with gay R&B star Frank Ocean, who claimed that Brown threatened to shoot him and that a member of Brown’s entourage called Ocean a “faggot.” Later in 2013 Brown was charged with felony assault after he and his bodyguard allegedly beat two male fans who had requested a photo. Before the melee began, Brown allegedly said, “I’m not into this gay shit, I’m into boxing.” Brown was then sentenced to anger management rehab and was sued by one of the victims. Brown lengthy criminal history has caused Canada and the United Kingdom to bar his entry for concert tours. Brown has also been known to issue homophobic tweets. And yet he was booked for a gay party?

Previous TODAY: Nutjob Flip Benham & Supporters To Descend On Private Kentucky Home Of Federal Judge David Bunning And Call For His Arrest
Next Kim Davis Appeals To Governor: Let Me Out Of Jail