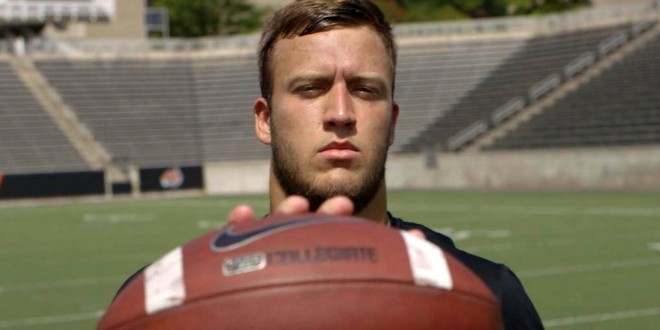 When he was a student, Princeton coach Bob Surace wrote a thesis paper on baseball great Jackie Robinson breaking down racial barriers through the sports world. He wrote about the courage and strength Robinson exuded on the quest for equality. On Tuesday, Surace got to be a part of a story he believes to offer the same type of message. Princeton junior offensive lineman Mason Darrow came out as gay in an in-depth profile on Outsports.com. He’s currently the only openly gay Division I football player. Princeton, an FCS program, opens its season Saturday against Lafayette. “I didn’t know,” Surace, a former assistant with the Cincinnati Bengals, told USA TODAY Sports by phone. “He told me he needed to talk and I was worried because he had just come off a major knee surgery. Then he told me and I was like, ‘This is great.’ I think it’s a great sign that some of the players knew since he was a freshman and it didn’t get back to the coach. The guys respect him so much. He’s a courageous young man. And hopefully by virtue of a strong, tough, physical football player coming out like this, he can help another young man perhaps in high school to do the same in being himself.”

Read the great interview with Darrow at Outsports.