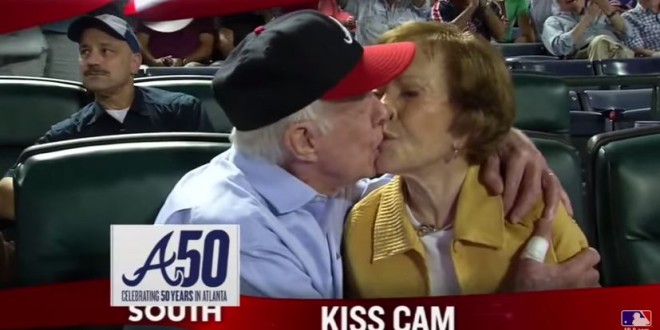 The Atlanta Braves’ “Kiss Cam” entertainment at Turner Field featured a famous couple Thursday night: former President Jimmy Carter and wife Rosalynn. The two were in their usual seats near the Braves dugout during a 5-0 loss to Toronto, and they received a loud cheer when shown on the video board. Carter kissed his wife and then gave a big smile as the cheers continued. The Carters stayed around for all nine innings of the game. Former President Carter, 90, announced last month he has cancer that spread to his brain.

The Carters have been married for 69 years. Jimmy Carter turns 91 on October 1st. (Tipped by JMG reader Dwight)

Previous MICHIGAN: Expelled Adulterous Anti-Gay Lawmaker Cindy Gamrat Files To Run For Her Old Seat
Next Wingnut Site: Doritos Are Now The Gateway Snack To Introduce Children To The Joys Of Homosexuality