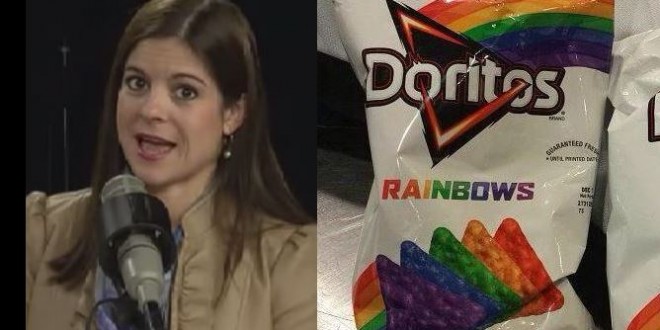 One Million Moms Vs Frito-Lay

The rainbow Doritos promotion has been over for more than a week, but don’t tell that to nutjob Monica Cole, who is screaming about anti-Christian persecution by a bag of corn chips. She writes:

The latest assault on Christian values comes from a company you’d never guess. Frito-Lay has designed “Dorito Rainbows” chips along with a rainbow colored bag, all for the cause of promoting homosexuality. The rainbow colored chips will be mailed to anyone who gives $10 or more to the LGBT “It Gets Better Project” youth initiative. The organization was started by the notorious anti-Christian extremist Dan Savage. For years Savage has promoted sexual deviancy and hurled nasty insults at Christians. Not only is Frito-Lay promoting homosexuality among teens, but it is backing the agenda of one of the most anti-Christian bullies in America. Frito-Lay knows very well that by doing so, it is condoning open hatred and animosity towards people of faith, especially Christians. By making “Dorito Rainbows,” the company is showing its true colors. Take Action: Contact Frito-Lay and urge them to drop its promotion of anti-Christian bigotry, its support of bully Dan Savage and its Dorito Rainbow campaign. We have provided several ways you can contact Frito-Lay. Please, take action today and make your voice heard to stop the hate against people of faith.

One Million Moms and the AFA regularly shout that all they want is for companies to “remain neutral in the culture wars.” Remember that in a few weeks when they start their annual campaign against companies that fail to mention Jesus in their holiday advertising.