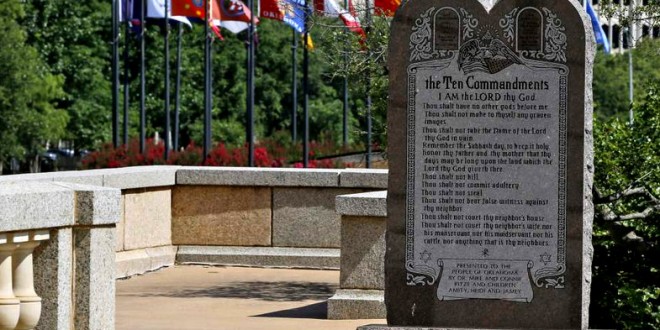 An Oklahoma commission has agreed to comply with the state Supreme Court’s order to remove a Ten Commandments monument from the grounds of the state capitol. Christian activists had maintained that the monument was historical rather than religious, but the court sided with plaintiffs represented by the ACLU. Tulsa World reports:

The Capitol Preservation Commission on Tuesday authorized a state agency to remove the Ten Commandments monument from the Capitol grounds to comply with a court order. The action came despite allegations from former Rep. Mike Reynolds that the meeting was illegal. Reynolds also said the court order directing its removal is not legal. Linda Edmondson, a senior member of the panel, presided. She is the wife of former Oklahoma Attorney General Drew Edmondson. The vote was 7-1 with one member, Lou Kerr, abstaining. Leia Laird cast the lone no vote. John Estus, a spokesman for the Office of Management and Enterprise Services, said his agency will meet with the builder who installed it to come up with a removal plan. The monument was donated by Rep. Mike Ritze, R-Broken Arrow, and his family.

The court’s deadline to remove the monument is October 11th and the state says it will be gone by then.