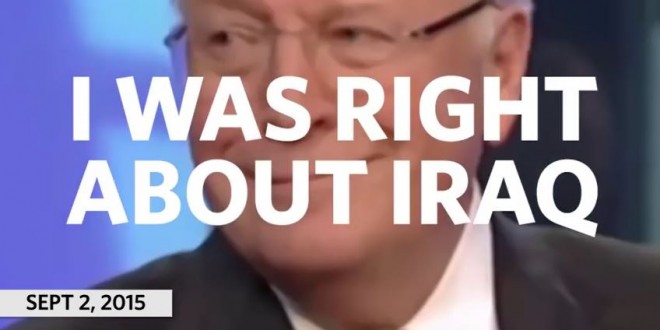 This scathing White House clip was going viral yesterday while most eyes were on Kentucky. Via Talking Points Memo:

Timed to a speech given by former Vice President Dick Cheney slamming President Obama’s Iran deal, the White House released a video highlighting Cheney’s continual defense of the Iraq war. The two-and-a-half-minute video titled “Former Vice President Dick Cheney: Wrong Then, Wrong Now” — which was featured prominently on the White House homepage Tuesday — spares no punches. It begins with a Fox News host asking Cheney last week why anyone who believes Cheney was wrong on Iraq should listen to him about the Iran deal. “Because I was right about Iraq,” Cheney said. It then segues into the abundant news clips from the run-up to Iraq War in which Cheney offers scores of claims first urging then defending military action — from touting the presence of weapons of mass destruction to predicting that Iraqis would great American troops “as liberators.”