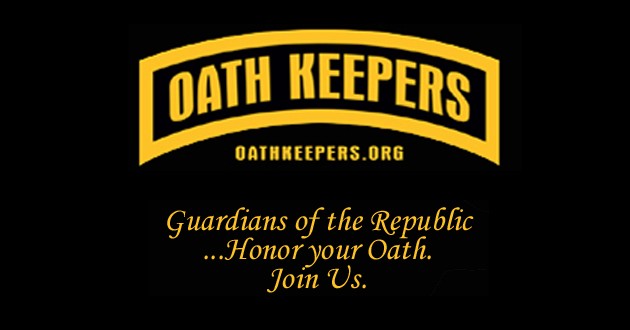 Oath Keepers: The Liberty Counsel Doesn’t Want Us And We Won’t Be “Defending” Kim Davis From Rearrest

The heavily-armed Oath Keepers militia tonight announced that upon the request of the Liberty Counsel, as an organization they will not be defending Kim Davis from a potential rearrest by federal marshals. However, if any individual Oath Keepers want to show up anyway, Oath Keepers wish they wouldn’t, but that’s up to them. From a statement published on their website:

Upon request by Kim Davis’ legal team, Oath Keepers is canceling the planned security detail for Mrs. Davis in Morehead, Kentucky. Oath Keepers has been contacted by Kim Davis’ legal team at Liberty Counsel, and they have, on her behalf, declined our offer of assistance in protecting her from a possible repeat incarceration by Federal District Court judge David Bunning. We will, of course, respect her wishes, and are hereby issuing a stand-down for our security volunteers who were planning on deploying to Morehead, Kentucky on Monday.

Oath Keepers will NOT be conducting a security detail for Mrs. Davis. We always seek the full consent and cooperation of anyone we protect, and we must respect their wishes if they decline that protection. Anyone who was planning on going to Morehead, KY to serve on the security detail are now asked to not do so. We do thank you most sincerely for your willingness to step up, as unpaid volunteers, in defense of due process. That was a very honorable intent, and we commend you.

This is a free country, and of course you are free to still go there on Monday and peaceably assemble to express your support for her due process rights and your opposition to arbitrary arrest if you want to, but Oath Keepers will not be conducting a security detail, and she apparently does not want anyone else to do so. Therefore, we encourage you to save your gas money and time off work for another security detail, at another time (such as for our planned upcoming operation to guard Texas border ranches against drug cartel violence and invasion).

After several more paragraphs, the statement concludes with this:

PS- A SPECIAL MESSAGE TO OUR CRITICS: As for the many harsh critics of our offer to protect Mrs. Davis, it is frankly sad that so many Americans cannot understand taking a stand in defense of someone’s due process rights regardless of who that person is, what they stand for, or what they are accused of doing or have done. That should not matter, and all that should matter is our common ground of the Bill of Rights and the hard-won rights of due process and in particular jury trial.