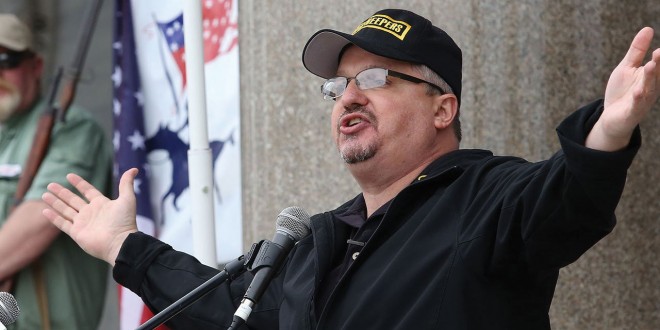 Oath Keepers Leader: We Will Protect Kim Davis From “Dictatorial Powers” Who Try To Arrest Her

“Now we see the rise of an imperial judiciary that not only legislates from the bench but is attempting to expand their ‘contempt’ power to likewise swallow up our Bill of Rights and circumvent jury trial. Both methods are used to allow the powerful office holder to merely point his finger and have his opponent thrown behind bars without a grand jury indictment and without being found guilty by a jury of their peers. No innocent until proven guilty before a jury. Just ‘guilty’ because the leader says so. That is a dictatorship, whether done by a president or by a judge. No one man should have that kind of power in his hands alone to decide guilt and impose a sentence of indefinite detention. Under our Constitution, that dictatorial power does not exist. We must stand against this. And so we will protect her and prevent it from happening again. – Oath Keepers leader Stewart Rhodes, in a statement published today by Alex Jones’ InfoWars.

Yesterday the heavily armed “Christan patriot” Oath Keepers declared that they already have “boots on the ground” in Kentucky and that more are coming to stand between Davis and any federal marshals that might attempt to rearrest her on contempt of court charges.