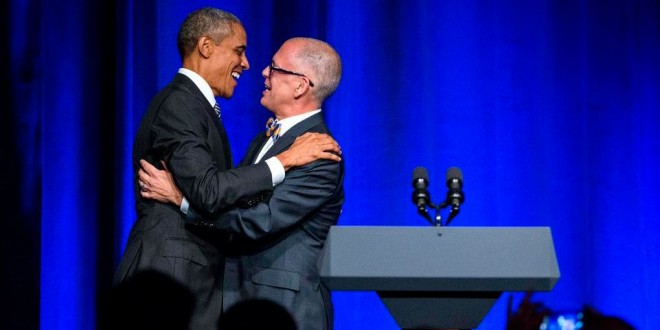 “One of their leading candidates argued that going to prison turns you gay,” Obama said, an apparent reference to Ben Carson, who had claimed that homosexuality in prison is proof that being gay is a choice. “I’m just stating the facts,” Obama continued. “Another candidate boasts that he introduced an amendment to end nationwide marriage equality. One said he loves the Constitution except for Article 3.” The President said that “America has left the leaders of the Republican Party behind.” “We need to reject politicians who are supporting new forms of discrimination as a way to scare up votes,” he added. “That’s not how we move America forward.”

President Barack Obama on Sunday mocked the GOP for being behind the times, chiding the party and its presidential candidates for continuing to hold out against marriage equality, even though a majority of the country now supports it. “The good news is they probably won’t use marriage equality as a wedge issue like they did in 2004 because the country has come too far,” he said in a speech at a Democratic National Committee fundraiser in New York. “In fact, America has left the leaders of the Republican Party behind.” The president also heralded the country’s evolving attitudes toward gay rights, noting it was a highly divisive political issue that not many Americans supported.

“Time after time, the cynics told us that we were foolish to keep believing, that we were naïve to hope, that change was too messy or not possible at all. And if you admit it, there were some in this room here who were skeptical that everything that needed to happen would happen. The cynics were wrong. Tonight, we live in an America where ‘don’t ask, don’t tell’ is something that ‘don’t exist,’” he said. “We live in an America where a growing share of older generations recognize that love is love, and younger generations don’t even know what all the fuss was about. And tonight, thanks to the unbending sense of justice passed down through generations of citizens who never gave up hope that we could bring this country closer to our founding ideals — that all of us are created equal — we now live in America where our marriages are equal as well.”

Previous Loony Pastor Who Prayed For God To Murder Obama Says He Is Running For President As An Independent
Next Clinton On Meet The Press: I Did Evolve On Gay Marriage But Now I’m “Thrilled” It’s The Law [VIDEO]