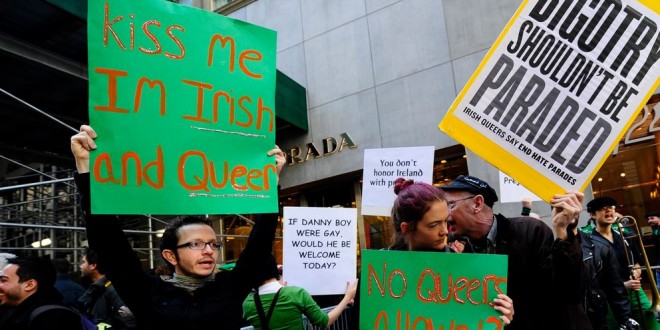 Bill Donohue is going to have Catholic kittens! Via the Irish Queers:

We are happy and relieved to announce that, after 25 years of struggle, we have won! The NYC St. Patrick’s Day parade has dropped its bigoted ban: an Irish LGBTQ contingent will finally march with its own banner in the parade next March 17th. From the beginning, our demand has been for an Irish LGBTQ contingent to march behind their own banner saying who they are, like all other contingents. Today’s decision to invite the Lavender and Green Alliance does just that! This is a victory for the grassroots organizing, civil disobedience, and street protest of the Irish Lesbian and Gay Organization and its successor, Irish Queers. Protests held the line year after year where politics constantly failed. It’s also a victory for our beautiful queer and Irish community of support, stretching from New York City to Ireland and beyond.

Today’s news comes after longtime parade chairman John Dunleavy was ousted back in June over his steadfast opposition to LGBT participation. Shortly before he got the boot Dunleavy declared that gays were “going to have a problem” if they were to attempt to march in the 2016 parade. The Manhattan parade, the largest in the world, has been boycotted by major politicians for years. Let’s hope that the lovely Queens For All counter-parade continues despite the Manhattan rule change. Also: Panti Bliss for 2016 Grand Marshal!