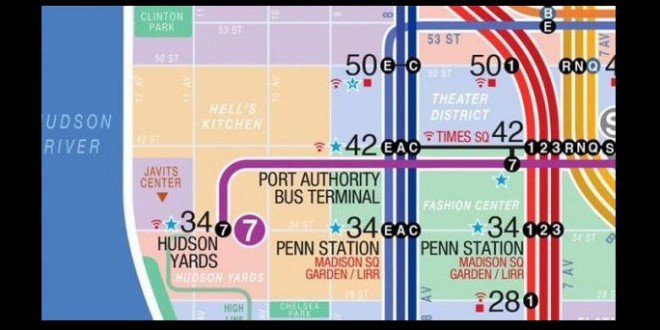 Back in December 2013 then-NYC Mayor Michael Bloomberg rode the 1.5-mile extension of the 7 line from Times Square to Hudson Yards and held an “opening ceremony” in the new station. More than 18 months later after numerous issues and a $400M overrun on the $2B budget, the station will finally open this Sunday.  Allegedly. Crain’s Business reports:

The subway system has not been expanded since 1989, when three new stations, on the Upper East Side, Roosevelt Island and in Long Island City, opened. On Sept. 13, the 26-year drought will end when a 7 train pulls into the 34th Street/Hudson Yards stop. There should be plenty of elbow room for riders until New Yorkers get used to the idea of subway service west of Ninth Avenue and below West 59th Street, heretofore a mass-transit desert. But if all goes well, it will soon be bustling: The station is within walking distance of the Javits Center, the High Line and Hudson River Park, and right underneath the Hudson Yards megaproject, which will be the largest private real estate development in U.S. history. The station was designed to accommodate growth, with a mezzanine running the entire length of it. Commuters will be shuttled between the platform and the street, 125 feet above, by elevators that move diagonally, and kept comfortable by a system that’s supposed to prevent station temperatures from surpassing 78 degrees.