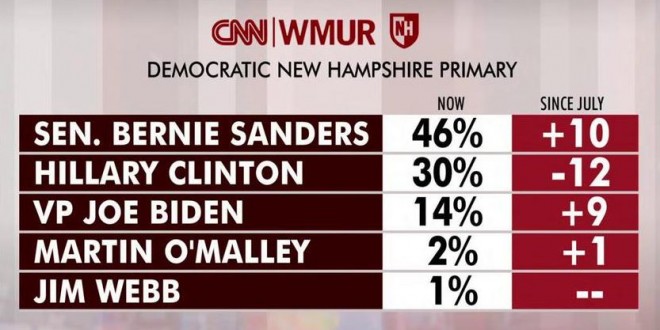 As summer turned to fall, a chilly wind was blowing in New Hampshire for Hillary Rodham Clinton: A new poll on Thursday showed Senator Bernie Sanders of Vermont surging ahead of Mrs. Clinton with 46 percent of the vote to 30 percent for her. The poll, by the University of New Hampshire for CNN and WMUR, found that even if Vice President Joseph R. Biden Jr. entered the race, he would not garner nearly enough support to win or change the dynamic of the race. Just 14 percent of likely Democratic primary voters said they would back Mr. Biden. If Mr. Biden does not run, the poll suggests that more of his supporters would back Mrs. Clinton, but not enough to put her over the top. There does not appear to be a groundswell of support in New Hampshire for a Biden run — 37 percent said he should run, but 32 percent said he should not. Mr. Sanders has a strong lead over Mrs. Clinton among men and is nearly tied with her for support among women. He also bests her in personal traits: Voters view her as the least honest and least likable of the major candidates. Previous Kim Davis To Gov. Beshear: This Is All Your Fault
Next Jeb Bush: Democrats Win Black Voters By Offering Them “Free Stuff” [VIDEO]