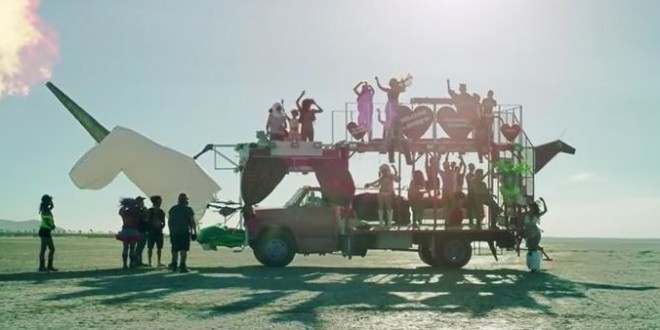 This hilarious Quizno’s ad has racked up nearly 800,000 views in the last few days, but not laughing are the organizers of Burning Man. The Reno Gazette-Journal reports:

The toasted sandwich company published a parody video, “Out of the Maze and into the Playa,” on YouTube earlier this week, a day after the weeklong utopian arts celebration in Northern Nevada’s Black Rock Desert concluded on Monday. The plot sends the characters of the “Maze Runner: The Scorch Trials,” a not-so-well reviewed science fiction thriller to be released later this month, to Burning Man as a test of character. “Welcome to Burning Man. The world outside is hanging on by a very thin, non-GMO, cruelty-free, organic hemp thread. Beyond this tent flap lies the beginning of your new lives as Burners,” a Burner says to the characters at the beginning of the video.

Burning Man takes issue with the clip and is considering legal action, not because of the mockery it makes of the more than 70,000-person annual event but because the video is theft of the event’s intellectual property, according to Burning Man spokesman Jim Graham.”We are pretty proactive about protecting our 10 principles, one of which is decommodification,” Graham said. “We get a quite a number of requests each year from companies wanting to gift participants with their product or to capture imagery or video of their products at the event, and we turn them all down.” “We’ll be coordinating with our legal team to see what action we can take,” Graham said. Quizno’s representatives could not be immediately reached Thursday for comment.

Burning Man has taken action against previous companies that attempted to incorporate their images, logos, or The Man himself into ad campaigns.