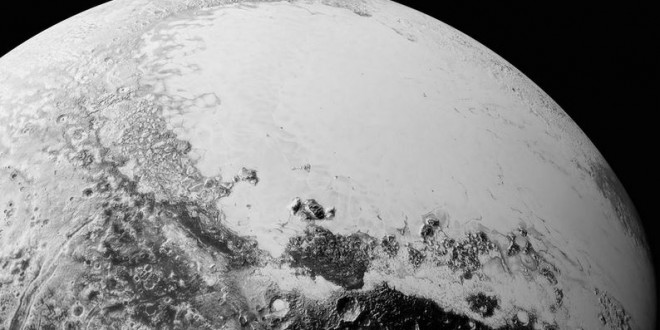 A new set of images has been received from the New Horizons spacecraft, showing close-up images of Pluto taken on July 15 (and only just recently processed) while it was passing by the dwarf planet at high speed — but not so fast it couldn’t see terrain so varied it’s astonishing astronomers. “If an artist had painted this Pluto before our flyby, I probably would have called it over the top — but that’s what is actually there,” said the mission’s principal investigator, Alan Stern, in a NASA release. With wide plains, mountains and valleys, deltas implying moving liquids, and a dozen other features, Pluto has a far more complicated surface than many astronomers and geologists expected. This complexity offers a hint at Pluto’s past. There may even be dunes — which implies strong winds, which no one expected to find on the dwarf planet. “Seeing dunes on Pluto — if that is what they are — would be completely wild, because Pluto’s atmosphere today is so thin,” said William McKinnon, deputy lead of the Geology, Geophysics and Imaging team. “Either Pluto had a thicker atmosphere in the past, or some process we haven’t figured out is at work.”

New Horizons is already more than 43 million miles past Pluto. Previous Also Last Night On Miss America 2016
Next What Will Kim Davis Do Today?