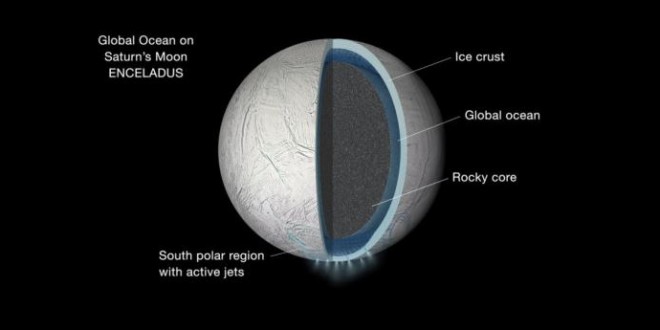 NASA: One Of Saturn’s Moons Has An Ocean

NASA’s Cassini–Huygens probe launched back in October 1997 and 18 years later it continues to provide fascinating discoveries. Via Science Daily:

A global ocean lies beneath the icy crust of Saturn’s geologically active moon Enceladus, according to new research using data from NASA’s Cassini mission. Researchers found the magnitude of the moon’s very slight wobble, as it orbits Saturn, can only be accounted for if its outer ice shell is not frozen solid to its interior, meaning a global ocean must be present. The finding implies the fine spray of water vapor, icy particles and simple organic molecules Cassini has observed coming from fractures near the moon’s south pole is being fed by this vast liquid water reservoir. The research is presented in a paper published online this week in the journal Icarus. Previous analysis of Cassini data suggested the presence of a lens-shaped body of water, or sea, underlying the moon’s south polar region. However, gravity data collected during the spacecraft’s several close passes over the south polar region lent support to the possibility the sea might be global. The new results — derived using an independent line of evidence based on Cassini’s images — confirm this to be the case.

The twin-module Cassini-Huygens separated in 2004 and the Huygens section landed on Titan, Saturn’s largest moon, in 2005. Cassini remains in Saturn’s orbit and will make a close flyby of Enceladus on Oct. 28th.

RELATED: Per Wikipedia, Saturn has 62 confirmed moons, only 13 of which have a diameter larger than 50 kilometers.