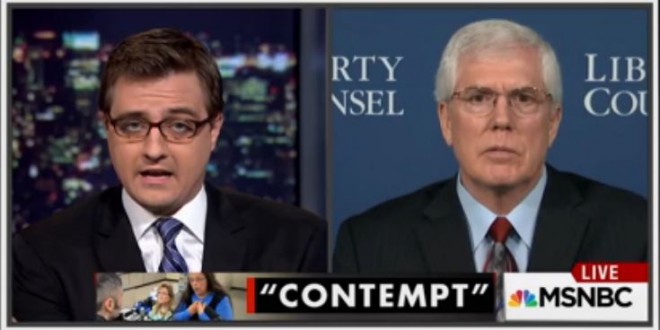 You’ll enjoy this. Crooks & Liars has the recap:

Chris Hayes is getting better at dealing with all-out crazy people on his show, but I won’t lie — this is still painful to watch. Liberty Counsel director Mat Staver, who is Kim Davis’ attorney, appeared to cry a river on Hayes’ show over Davis’ continued incarceration. At one point, he attempted to connect Davis’ jailing with Martin Luther King’s Letter from a Birmingham Jail in order to frame her as a martyr for liberty. As I’ve stated elsewhere, the only thing she’s martyring herself for is Holy Billionaires looking to stir up the body politic to elect the likes of Rand Paul to the Senate since he’ll never win the GOP nomination, post Trumpocalypse. No, Kim Davis is not Martin Luther King. Not even close. Moving on then, to the argument for religious liberty, which also fell flat. In the end, it was a simple fundraising question that sent Staver into deep-space orbit. Hayes asked him, “How is your fundraising going these days?” Staver shifted to glassy-eyed fury, first deflecting by asking Hayes whether he’s ever asked the ACLU that question. Defensive much? When you don’t want to answer, obfuscate. He went on that way in a back and forth with Hayes, never answering the question. Of course, the reaction and lack of an answer is an answer in itself.

Previous This Is An Ad For Something [VIDEO]
Next TEXAS: State Hit With $740,000 Bill For Legal Fees In Failed Battle Against Same-Sex Marriage