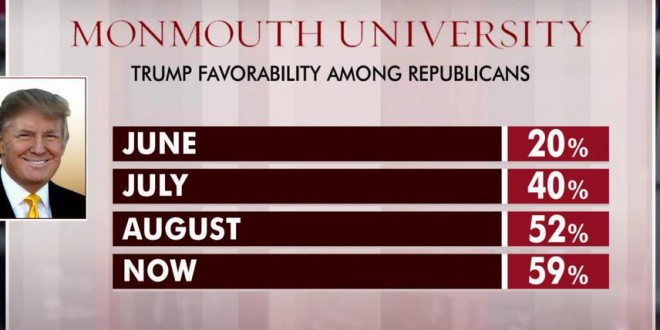 In the first national Monmouth University poll out since the first Republican presidential debate, released Thursday, the real estate mogul is showing a commanding lead at 30% support. That’s up 4 points from a poll taken just before the debate last month, but within the poll’s margin of error. It’s also a new high for Trump, narrowly topping the 28% support he registered in a Quinnipiac poll late last month. But Carson, a neurosurgeon, posted the biggest gain in support since August, jumping 13 points to second place. He is holding down 18% support now among Republicans. That continues a trend of recent polls that show him moving up the list.Both Trump and Carson saw their favorability ratings grow. Fully two-thirds of voters rated Carson favorably, up 22 points from August, and only 6% viewed him unfavorably. Trump was viewed favorably by 59% of Republican voters, up 7 points from August, and unfavorably by 29%. Bush’s favorability, on the other hand, ebbed by 11 points since August. He was at 41% favorably to 39% unfavorably, essentially even given the poll’s margin of error.

In a separate poll, Trump beats all Democratic candidates in head-to-head matches:

Republican presidential front-runner Donald Trump leads Democrat Hillary Clinton head-to-head, according to a new poll released Friday. The poll by SurveyUSA finds that matched up directly, Trump garners 45 percent to Clinton’s 40 percent. In other head-to-head matchups, Trump beats out Sen. Bernie Sanders (I-Vt.) by 44 percent to 40 percent; Vice President Joe Biden by 44 percent to 42 percent; and former Vice President Al Gore by 44 percent to 41 percent. Trump’s surge past Clinton marks a dramatic turnaround in the polls. A CNN/ORC sampling of national voters in late June — just days after Trump entered the race — found that 59 percent supported Clinton to 34 percent picking Trump in a head-to-head race. The same poll taken in July saw Clinton at 57 percent to Trump at 38 percent. And a version taken in August had Clinton with 52 percent support and Trump with 43 percent.