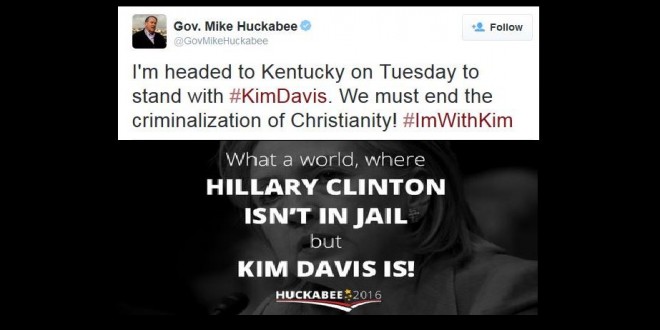 While Kentucky clerk Kim Davis continues to sit in jail after refusing to give out marriage licenses to same-sex couples, Mike Huckabee plans to stand up for her. The former Arkansas governor announced Thursday that he will be heading up a “liberty rally” next Tuesday for the jailed county clerk in Kentucky. According to his campaign, Huckabee will be joined by Matt Staver, the founder and chairman of Liberty Counsel, who is representing Davis in court. “This is a reckless, appalling, out-of-control decision that undermines the Constitution of the United States and our fundamental right to religious liberty,” Huckabee said in a statement. “Having Kim Davis in federal custody removes all doubt of the criminalization of Christianity in our country. We must defend religious liberty and never surrender to judicial tyranny.”