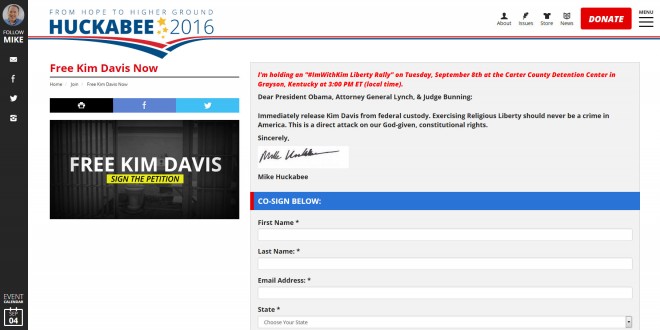 Last night I tried to buy FreeKimDavis.com but someone had just snatched it up. Whoever that person is, that URL now redirects to the Human Rights Campaign. Snork! (I was selfishly planning on JMG.) Anyway, Mike Huckabee has had to settle on FreeKimDavisNow.com. From World Net Daily:

The Internet address FreeKimDavisNow.com goes directly to Huckabee’s campaign site. Huckabee also posted a meme with this text over a black and white picture of Hillary Clinton: “What a world, where Hillary Clinton isn’t in jail but Kim Davis is!” A “Free Kim Davis: Sign the petition” link was making waves on his Twitter page too, with more than 350 retweets and more than 400 favorites by Friday morning. In a statement issued shortly after Davis was ordered to jail, Huckabee said: “Kim is asking the perfect question, ‘Under what law am I authorized to issue homosexual couples a marriage license?’ That simple question is giving many in Congress a civics lesson that they never got in grade school.” He was referencing to the view the Supreme Court cannot make a law, an argument he’s been making in recent months, Talking Points Memo reported.

Huckabee will host a rally outside Kim Davis’ hoosegow on Tuesday.