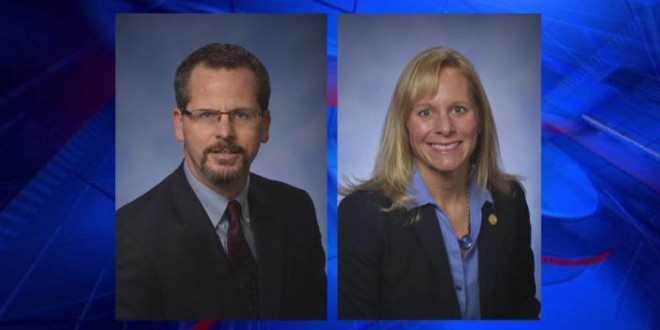 Early this morning the anti-gay Tea Party rep who concocted a bizarre gay hooker cover story to distract from his adulterous affair resigned from the Michigan state house shortly after it became clear that he would be expelled. His anti-gay “devout Christian” cheating partner stuck it out until she was expelled. The Detroit Free Press reports:

It took 14 hours, two failed votes and a day full of drama, but at 3:12 a.m. Friday, state Rep. Todd Courser resigned from his state House seat, and an hour later, Rep. Cindy Gamrat was expelled on a 91-12 vote, ending a controversial sex and cover-up scandal that has rocked Lansing for the last month. “I felt is was the appropriate thing to do. I put everybody through a whole bunch, my family, constituents and the people in this room,” Courser said. “You go 14-15 hours later, they would have been doing a third vote. I felt they were just going to go until they got their answer.” His resignation letter was short and simple: “I hereby tender my resignation from the Michigan House of Representatives effective immediately. It has been an honor serving with the dedicated members and staff of the House of Representatives.” Gamrat decided to stick it out and asked her colleagues to censure, rather than expel her. “I firmly believe in restoration and redemption,” she said.” I have done everything I can to redeem this situation and I’m sincerely sorry for what this has caused. I still believe my actions warrant censure, but not expulsion.” Her colleagues disagreed, voting 91-12 too expel her with five Democrats declining to vote on the matter.

Last month a tearful Gamrat pleaded for forgiveness with her cuckolded husband by her side, vowing that she would never resign. Before their affair was exposed, the pair had introduced a trio of anti-gay marriage bills that would have outlawed all civil marriages in Michigan. (Tipped by JMG reader TJ)

Previous Hate Group Leader Tony Perkins Is Furious After Frontrunner Donald Trump Blows Off Duggar Fest 2015
Next Biden: I Still Haven’t Made Up My Mind [VIDEO]