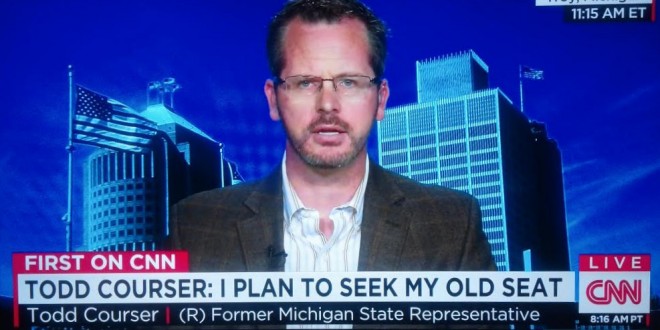 MICHIGAN: Second Ousted Anti-Gay Former State Rep Will Also Run To Get His Old Seat Back

Saying that the fake conservatives in his own party had used “totalitarian tactics” to oust him over his adulterous affair with a fellow lawmaker, this morning former Michigan state Rep. Todd Courser appeared on CNN to declare that he will run in the special election for his old seat.  Courser: “I’m a believer in Christ and I’m looking forward to whatever God has for me in this next chapter.” Yesterday Courser’s cheating partner, former Rep. Cindy Gamrat, declared that she will be seeking her old seat as well.

When it became clear that their Affair In Jesus was about to be exposed, Courser leaked a bizarre cover story about his having been caught having sex with male prostitute in the alley behind a nightclub. Shortly before their national humiliation, the pair introduced a trio of anti-gay bills that would have outlawed all civil marriages in Michigan.

From Gamrat’s campaign site: “I believe in traditional marriage of one man and one woman which has been the backbone of our families and societies for hundreds of years.  Although I would rather not see our government be involved in marriage, it is involved in many levels including social security, benefits, tax law, inheritance, etc and so as such is required to be defined.  Millions of Michigan voters made it clear that they wanted marriage defined for legal purposes in our state as between one man and one woman when they overwhelmingly passed the Marriage Protection Amendment in 2004 to be made part of our State Constitution.”

Previous MANHATTAN: Bedbug Infestation Chases Maze Runner Premiere Out Of Nation’s Busiest Movie Theater
Next Lady Gaga – Till It Happens To You [VIDEO]