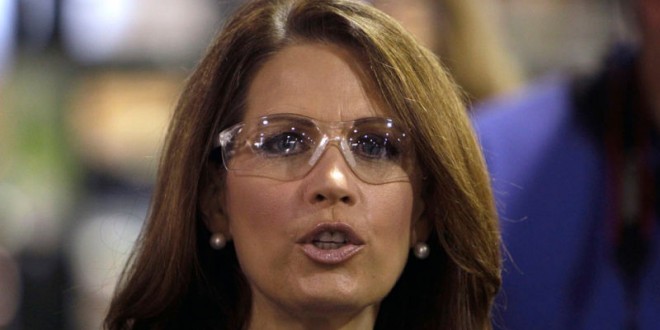 Jesus is taking way too long to come back, but Michele Bachmann knows how to hurry him up. Via World Net Daily:

Forget the sanctions, said former Rep. Michele Bachmann, R-Minn. The only way to stop Iran from getting a nuclear weapon is to bomb their facilities, she told WND. “There is only one tried and true method that stops a rogue nation from getting a nuclear bomb, and it’s this: It is for a country like the United States to take our military superiority and to go into that country and to drop bombs on their nuclear hardware and destroy it.” “That’s called peace. That’s not called war,” she said in a rebuke to President Obama’s claim that it is either his nuclear deal with Iran or war. Bachmann reflected, as a former member of the House Intelligence Committee, she had come to the conclusion that sanctions were only mildly effective, and there was no way they would ever prevent Iran from getting nuclear weapons.She insisted bombing Iranian nuclear facilities would prevent war, not cause one.

And you thought we were done with her.