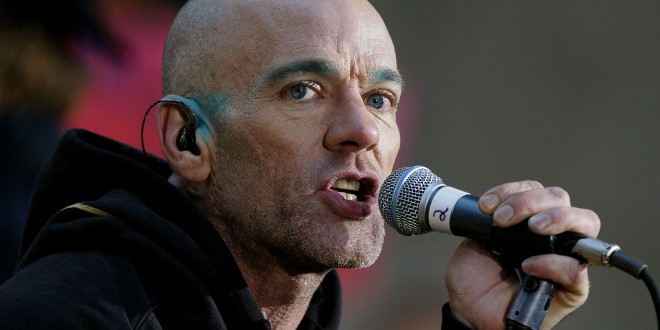 Donald Trump has been blaring R.E.M. on the campaign trail, and the band doesn’t feel fine about it. The GOP presidential candidate took to the podium Wednesday on the steps of Capitol Hill to slam President Barack Obama’s proposed Iran nuclear deal. His walk-up music? R.E.M.’s 1987 hit “It’s the End of the World as We Know It (And I Feel Fine).” Rival candidate Sen. Ted Cruz, whom Trump acknowledged having a political “romance” with, was the one who invited Trump to speak at the rally. R.E.M. frontman Michael Stipe was livid after the use of his band’s song at the event. “Go fuck yourselves, the lot of you — you sad, attention-grabbing, power-hungry little men,” Stipe said in an email to The Daily Beast. “Do not use our music or my voice for your moronic charade of a campaign.”

REM was more diplomatic on their Facebook page: “While we do not authorize or condone the use of our music at this political event, and do ask that these candidates cease and desist from doing so, let us remember that there are things of greater importance at stake here. The media and the American voter should focus on the bigger picture, and not allow grandstanding politicians to distract us from the pressing issues of the day and of the current Presidential campaign.”

RELATED: On Tuesday 80s band Survivor threatened to sue Mike Huckabee and/or Kim Davis for using Eye Of The Tiger.