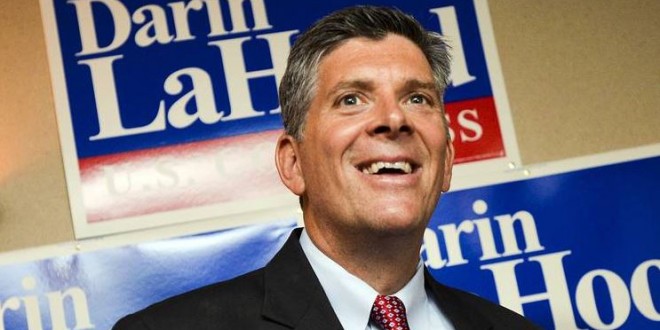 LaHood, easily won a special election Thursday to replace disgraced former U.S. Rep. Aaron Schock, sending a familiar name to Washington from Illinois. The younger LaHood’s victory brings the number of U.S. House members back to 435 and comes after Schock resigned in the middle of a spending scandal that included redecorating his congressional office in the style of television drama “Downton Abbey.” LaHood, a former prosecutor, had an overwhelming advantage over Democratic high school teacher Rob Mellon in the reliably Republican territory that touches 19 counties in central Illinois. Along with name recognition, LaHood had party backing, key endorsements and amassed roughly $1.2 million, compared with Mellon’s approximately $10,700, according to campaign finance records. LaHood, 47, played up his area roots while trying to distinguish himself as more conservative than his father, a longtime congressman who worked in Obama’s Cabinet from 2009 to 2013 and was known for his bipartisan approach.

The very first sentence on LaHood’s campaign site reads: “I believe that ObamaCare has been an abomination.”  He fought against same-sex marriage in Illinois right up until the final state Senate vote in 2013.  He had the terrible sadz that day:

“I believe strongly in the sanctity of marriage between one man and one woman. Additionally, I have extreme reservations about the legislation not having exemptions for churches, synagogues or mosques and other religious institutions from being forced to perform same-sex marriages in their respective houses of worship,” LaHood said. “The legalization of civil unions has wreaked havoc on the services that were offered by Catholic Charities of Peoria, because the institution was banned from performing adoption services as a result of a discriminatory policy against the church by the administration of Pat Quinn. It is too bad that today’s vote was political theater and the Senate Democrat leadership chose to avoid the most pressing issues of pension reform and the fiscal crisis.”

Previous End Times To Begin Next Week (Or Not) [AUDIO]
Next Mat Staver: I Don’t Know What Kim Davis Will Do On Monday, But She Won’t Surrender [VIDEO]