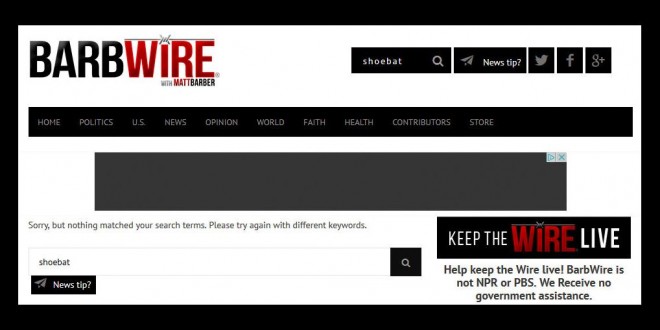 Back in October 2014, Matt Barber’s BarbWire ran a column by Phillip Stallings, who advocates for the “lawful executions of the sodomites.” The column was deleted the following day after Right Wing Watch published an expose of Stallings’ views. Barber then tweeted that he’d been unaware of Stallings’ “appalling position.” In February 2015 BarbWire ran a column by Tim Brown, which linked back to a post on Brown’s personal site in which he calls for the “death penalty for sodomites.” Shortly after I published a post about Brown’s column, the link to Brown’s murderous call was removed without comment from his BarbWire column. The following day Brown’s entire column was deleted. One month later Barber published a column for World Net Daily in which he poo-poohed the “unnoticed” death penalty link in one of the two columns and blamed “virulent homosexual and atheist bloggers” for having a “heyday” with its publication. Barber’s World Net Daily column made no mention of the second deleted BarbWire call to execute homosexuals.

Which brings us to Theodore Shoebat and his father Walid Shoebat, each of whom published several columns on BarbWire over the last several months. Unlike the above-cited Stallings and Brown, neither Shoebat called for executing homosexuals in their BarbWire columns, nor did those columns link to such calls on their own site. But it’s on their own site where Theodore Shoebat regularly publishes strident calls for the executions of homosexuals, atheists, and even Christians who support LGBT rights, all while his columns also appeared on BarbWire. Every time I’ve reported on the younger Shoebat’s calls to execute LGBT Americans, I’ve noted that his other columns also continued to appear on Matt Barber’s site.  Until sometime very recently that is, because now all of the columns by both Shoebats appear to have been deleted from Matt Barber’s site. (I’ve archived all the original BarbWire columns via the Wayback Machine.)

Longtime readers will recall that back in 2009 the Liberty Counsel claimed to have called the FBI on JMG, which they declared was inciting “terrorism” against Christians due to a couple of ill-considered comments made by two JMG readers in a post about Peter LaBarbera. Their claim was picked up by dozens of news sites on the right and left, with some Christian sites running headlines like Gay Activists Mull Organized Terrorism Against Christians and Homosexual Blog Forecasts Violence. LGBT and progressive sites noted the ridiculousness of siccing the FBI on a writer because of comments made by blog readers and the FBI, of course, never came calling. (I did begin to more frequently post JMG’s long-existing commenting rules about even the most idle, vague, or jokey threats. Those commenting rules are now permanently posted on the new JMG about page.)

The point of mentioning the 2009 nonsense about the FBI is to illustrate the utter hypocrisy of Matt Barber in dismissing calls on his own site to execute homosexuals as a mere editorial oversight while continuing to publish columns by Theodore Shoebat, a deranged advocate of the death penalty for homosexuality. Anonymous comments on JMG? Call the FBI! Open calls to murder homosexuals in bylined columns on Barber’s site? How DARE you point that out! Can you imagine the furor if this site regularly published columns by writers who advocate for executing Christians? The FBI would only be the start of it. Heck, in 2013 Matt Barber even called for then-Attorney General Eric Holder to investigate me for alleged reader comments made about an anti-abortion rally in Argentina.

So why did Barber finally delete the Shoebat columns after multiple posts about them on JMG? I suspect that it has to do with the new national prominence of the Liberty Counsel that has resulted from the Kim Davis case. Many of you have noted that the Liberty Counsel plays nicey-nice with the media when speaking about Kim Davis, all while their radio host runs a website that has published columns from advocates of the death penalty for homosexuality. Some of you have tweeted major journalists like Jake Tapper and Megyn Kelly about those columns so maybe there have been some questions. Whatever the reason, the columns are gone and that’s a victory, albeit small, for the good guys.

Previous Limbaugh: NASA Faked Finding Water On Mars To Further The Leftist Climate Change Agenda
Next Mugabe At United Nations: We Are Not Gays [VIDEO]