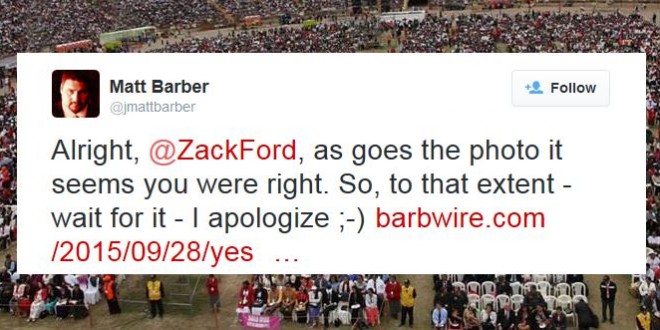 Over the weekend Liberty Counsel head Mat Staver wowed the assembled crackpots at Duggar Fest with a photo which he claimed shows 100,000 Peruvians gathered in a Lima soccer stadium to pray for Kim Davis. Aided by Twitter user DCHomos, ThinkProgress writer Zack Ford swiftly debunked the photo with video evidence that it was taken over a year ago. Ford’s post spurred a furious press release by the Liberty Council in which they declared that the photo is absolutely real:

Julio Rosas, a member of the Peruvian Congress, met personally with Mat Staver and Kim Davis the day prior to the award, explained the prayer meeting, and presented the photograph. Congressman Rosas was involved in announcing the prayer gathering. This past Saturday Congressman Rosas again confirmed the event, and this morning he again reaffirmed the prayer meeting. [snip ] While meetings of 70,000 to 100,000 Christians in a soccer stadium may shock people in the United States, they are much more common in Peru. Oftentimes such gatherings do not appear on traditional media any more than the weekly church services in the United States appear on television.

According to the Liberty Counsel, even though there was no local media coverage, no social media mentions, no YouTube recordings, not even a promotional flyer of this massive Kim Davis event – that’s just because Peruvians so regularly meet in groups of 100,000 that such gatherings don’t get noticed. Matt Barber stuck with that all day on Twitter yesterday even in the face of much mockery. And then last night Ford lowered the boom again with a link to the original 2014 Facebook page bearing the photo. He writes:

Unsatisfied with the mystery origins of the photo shared by Liberty Counsel, Twitter user @DCHomos continued digging. He found it. It was posted on Facebook on May 25, 2014. As all of the other evidence indicates, it was from the prayer rally that happened well over a year before Kim Davis was on the radar. In fact, the image was posted on the Facebook account for the very organization that organized that event. Congressman Julio Rosas may have confirmed it was a rally for Davis, but it wasn’t, and so the Liberty Counsel and Matt Barber were wrong every time they defended its legitimacy.

That’s when Matt Barber posted a grudging admission in an update to his post on BarbWire:

Think Progress has updated its blog and linked to a Facebook post date stamped May 25, 2014, which, at the very least, calls into question the origin of the photograph given to Liberty Counsel by Congressman Rosas. BarbWire will continue to seek answers as to where this photograph first originated and why, apparently, someone within Congressman Rosas’ office (or elsewhere) represented to the congressman that it was a photograph of a prayer rally held in Peru for Kim Davis when, as it now seems, such was not the case. To the extent that we at BarbWire appear to have received inaccurate information, and, further, to the extent that Zack Ford and Think Progress appear to have been correct about the questionable nature of this photograph, it seems that they were right and we were wrong. We will update our readers as we receive further explanation.

Barber’s admission came after he wrote this about Zack Ford:

Think Progress is a left-wing extremist blog that exists to push “progressive” propaganda. Zack Ford is an atheist homosexual activist who blogs for Think Progress. It turns out that, in his excited “gotcha”-driven effort to discredit Liberty Counsel and deny that the Kim Davis rally ever occurred, Mr. Ford has, instead, discredited himself and embarrassed Think Progress. At the time of this report neither Zack Ford nor anyone at Think Progress has responded to inquiries as to whether they even bothered to reach out to Congressman Rosas’ office for verification of the rally before posting Ford’s irresponsible hit piece. That, of course, is the kind of thing that actual journalists do, so we at BarbWire aren’t that surprised. Nonetheless, we anxiously await Think Progress’ retraction and apology.

Actual journalist Zack Ford just BOOMED the fuck out of Matt Barber. We anxiously await Barber’s retraction and apology for his insults.

Previous Mugabe At United Nations: We Are Not Gays [VIDEO]
Next IGLHRC Is Now OutRight Action International