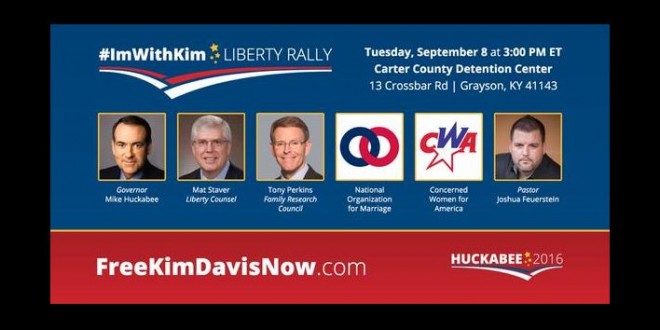 [NOTE! Auto-playing video!] Hate group leaders Tony Perkins, Brian Brown, and Mat Staver will join Mike Huckabee for a Kim Davis hate rally due to start with a 2:30PM press conference. Ted Cruz will be there too, but he has reportedly refused to be on the same stage with Huckabee, so he is due to appear any minute. The local CBS affiliate will be live-streaming once things get going and I’ll add other streams to this post if they become available.
UPDATE: Here’s a better video stream than the one I posted earlier.

Previous Rasmussen Poll: Only 26% Back Kim Davis
Next BREAKING: Kim Davis To Be Freed Today [UPDATED]