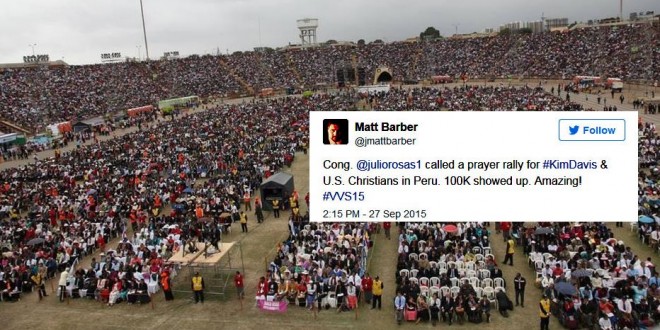 This weekend at the Values Voter Summit, Liberty Counsel head Mat Staver told the assembled crackpots that 100,000 Peruvians gathered in a Lima stadium to pray for Kim Davis. Staver showed the audience the photo in this post as proof of the event. That sent internet sleuths scrambling for evidence that this actually happened and you’ll be SHOCKED to learn that absolutely nothing has been found. Over at Think Progress, our pal Zack Ford recaps the truth about the photo:

Staver posted the image a second time on Sunday, claiming that Peruvian Congressman Julio Rosas was responsible for organizing it. There is not a single news story about a prayer rally taking place in Peru for Kim Davis. There is not a single post on Rosas’ Twitter or Facebook about such a rally, though he did send one tweet of support for Staver’s defense of Davis. And the image is almost certainly from a prayer rally known as “Jesús Te Ama Y Te Cambia” (“Jesus Loves You And Changes You), which did take place in Peru — over five days in May, 2014. Internet sleuths, including Twitter user @DCHomos, quickly identified the stadium as the Estadio Universidad Nacional Mayor San Marcos at the National University of San Marcos. Then, a number of videos seemed to quickly confirm that the image shared by Staver and Barber was from the 2014 convention organized by the Pentecostal Movimiento Misionero Mundial (Worldwide Missionary Movement).

As Zack and DCHomos point out, many videos on YouTube clearly show that the 2014 stadium event had the exact same layout, the same green media tent, the same banners, the same porta-potties, etc. Even the cloudy skies match the photo posted by the Liars For Jesus® at Liberty Counsel. Obviously Matt Barber and Mat Staver thought this ridiculous claim would go unchallenged and for the attendees of Duggar Fest 2015 it WILL forever remain the truth.