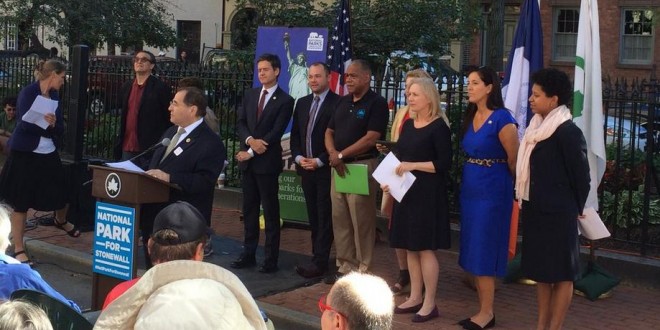 Two New York legislators are leading a campaign to designate Stonewall Inn as the first national park honoring LGBT history. Sen. Kirsten Gillibrand and U.S. Rep. Jerrold Nadler made their announcement Sunday in front of the Greenwich Village tavern that was the scene of a 1969 uprising at a key moment for the nascent gay rights movement. The two Democrats were joined by other elected officials and members of the National Parks Conservation Association. National parks can only be created by an act of Congress. They include sites of cultural or historic importance. Gillibrand says she and Nadler are first asking President Barack Obama to declare Stonewall a monument. A congressional vote on park status would come later. “We have a responsibility to preserve and respect the places important to our history, and the Stonewall Inn deserves our highest recognition,” Gillibrand said. “Victories like the repeal of ‘Don’t Ask, Don’t Tell,’ the passage of marriage equality in New York State and the final, decisive Supreme Court ruling securing our freedom to marry, were borne from the modern equal rights movement launched at Stonewall. It’s time for a national monument honoring the legacy of people and events that took place here.”