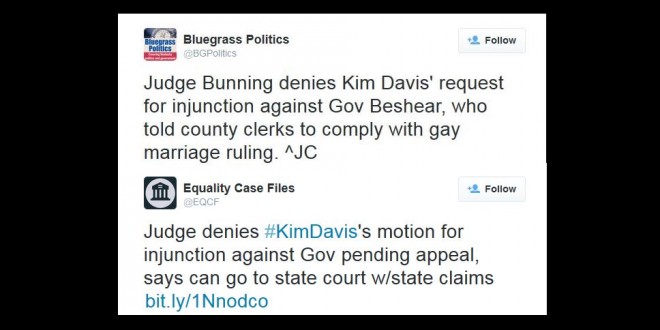 Just another little item for her to stew on over the weekend. Equality Case Files has the latest smackdown from Judge David Bunning:

In her Motion, Davis suggests that the Court could easily stem the tide of litigation by simply ordering Governor Beshear and Commissioner Onkst to remove her name and authorization from the marriage license form. While this is a seemingly simple request, it is not consistent with principles of federalism. Under the Eleventh Amendment, as interpreted by Pennhurst, the Court simply does not have the authority to order Governor Beshear or Commissioner Onkst to alter the marriage license form or amend KRS §402.100 based on alleged violations of Davis’ rights under the Kentucky Constitution and Ky. RFRA. Davis’ claims brought under state law should therefore be brought in Kentucky state court. To the extent that she seeks relief in the form of such an accommodation for violations of Kentucky state law, only the state court can grant such relief.

Previous Oath Keepers: The Liberty Counsel Doesn’t Want Us And We Won’t Be “Defending” Kim Davis From Rearrest
Next Trump Interviews Himself In The Mirror [VIDEO]