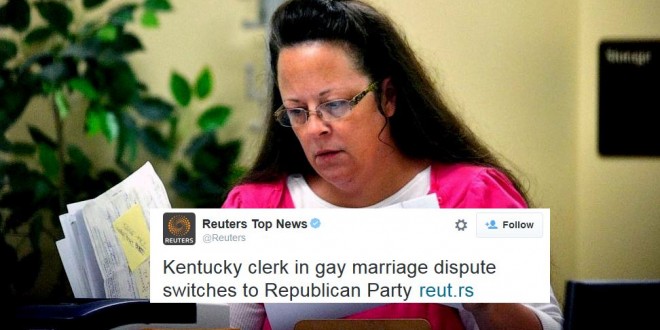 Kim Davis Is Now A Republican

Kim Davis has switched her party affiliation, doubtlessly to earn even greater applause when she receives her Martyr For Jesus Award tonight at Duggar Fest 2015. Reuters reports:

“My husband and I had talked about it for quite a while and we came to the conclusion that the Democratic Party left us a long time ago, so why were we hanging on?” she told Reuters in an interview at a hotel in Washington, where she has traveled to be feted at a Family Research Council event later on Friday. Davis also said she did not foresee a problem with the current marriage licenses being issued by her office in Morehead, Kentucky. Critics have charged the altered licenses, which removed her name and title and the name of the county, violate an order issued by U.S. District Judge David Bunning and raise questions about their validity. “I don’t think there should be much of an issue and the judge didn’t have any problem accepting the licenses that were issued when I was incarcerated, which had been altered, so I don’t see that there should be an issue,” she said. Davis added, however, that if the new licenses became an issue for Bunning, she was prepared to return to jail.

Wingnuts have been quite smug about Davis being a Democrat, so at least they won’t have that to smirk about anymore.