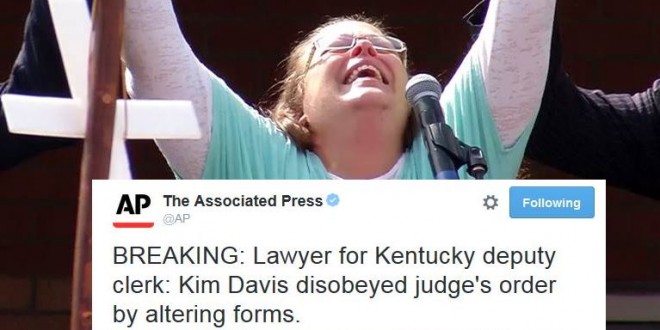 The attorney for one of the deputy clerks in Kim Davis’ office says Davis disobeyed a federal judge’s order when she altered marriage license forms for same-sex couples. Deputy Clerk Brian Mason has been issuing marriage licenses in Rowan County over the objections of Davis, the elected county clerk who believes same-sex marriage is a sin. Davis spent five days in jail for refusing to obey a federal judge’s order that she issue the licenses. The judge released Davis from jail but warned her not to interfere as her deputies issue licenses. Davis removed her name and the name of the county from the forms. On Friday, Mason’s attorney, Richard Hughes, said the altered forms would not be valid and thus constitute an attempt to violate the judge’s order.

Did we know that Mason has a lawyer? In any case, this will refuel the Davis saga after days of relative quiet.

UPDATE: Buzzfeed reporter Chris Geidner says that the AP is mischaracterizing the situation.