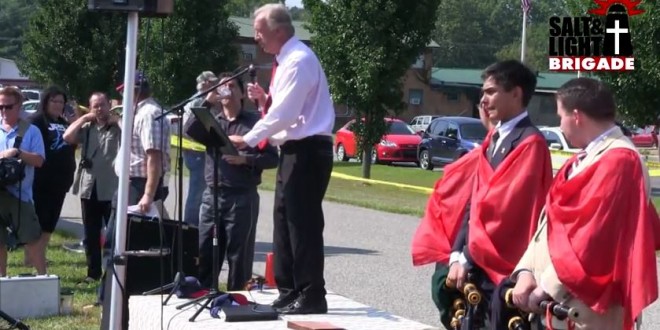 With the red-caped Catholic loons at his side, yesterday notorious white supremacist Michael Peroutka spoke at the rally outside the jail holding Kim Davis. Peroutka is a former leader of the League Of The South, which recently “celebrated” the 150th anniversary of the assassination of “tyrant” Abraham Lincoln.

The SPLC calls Peroutka “an avid Southern secessionist and radical Christian Reconstructionist.” According to Wikipedia, Christian Reconstructionists call for overthrowing the US government and replacing it with a “biblical theocracy.” The new Christian theocracy would then reinstate Mosaic penal laws under which “the list of crimes which carried a death sentence would include homosexuality, adultery [KIM DAVIS!], incest, lying about one’s virginity, bestiality, witchcraft, idolatry or apostasy, public blasphemy, false prophesying, kidnapping, rape, and bearing false witness in a capital case.”

In 2004 Peroutka ran for president on the Constitution Party ticket, placing fifth nationally with 150,000 votes. In 2012 the Montgomery Advertiser revealed that Peroutka provided almost of all the funds for Roy Moore’s successful campaign to return to the Alabama Supreme Court.  Last year Peroutka changed his party affiliation to Republican and was elected to the county commission in Anne Arundel County, Maryland. Also last year he and his family donated a collection of dinosaur fossils to Kentucky’s Creation museum.

And here he is raving about Kim Davis.