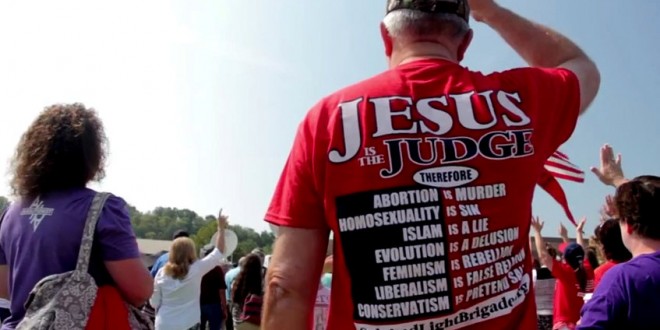 Hundreds of people gathered outside the Carter County Detention Center on Saturday and prayed for jailed Rowan County Clerk Kim Davis, who was locked up just a few hundred feet away. “She won’t bow, I promise you,” her husband, Joe Davis, told the crowd while dressed in overalls and a camouflage ball cap. He said he talked to her the morning she was put in jail and the two of them decided not to give in. “I’m just an old, dumb, country hillbilly, but I know God,” he said. For the second straight day, Kim Davis awoke in the Carter County Detention Center, put there by U.S. District Judge David Bunning for her refusal to follow a court injunction requiring her to issue marriage licenses to gay couples. Flip Benham [nutcase father of the Benham brothers], an evangelist from North Carolina, praised Bunning’s father, former U.S. Sen. Jim Bunning, as a staunch conservative but ended his kind words there. “His son is working against the will of God,” said Benham, who carried a white cap with the name “Jesus” on it. “He’s being used by the devil to park Kim here.” Others called for people to pray for Bunning — or to at least pray that he repents.

In the clip below you’ll see the banner of the red-caped Catholic loons.