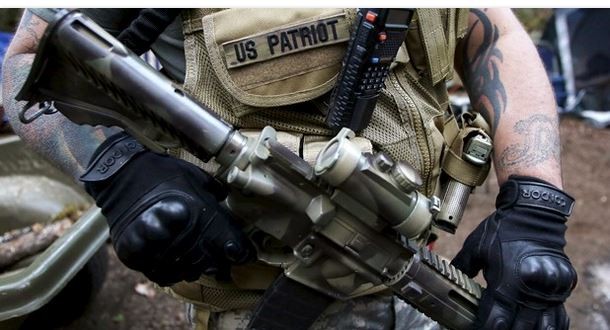 The Oath Keepers, the heavily armed and self-described “Christian patriot” militia who recently appeared in Ferguson, Missouri to “help” the police quell civil unrest, will be on the other side of the law in Kentucky where they have vowed to prevent federal marshals from ever arresting Kim Davis again. Right Wing Watch reports:

Oath Keepers founder Stewart Rhodes announced yesterday that he had reached out to Davis’ lawyers at Liberty Counsel to offer the protection of his group, which he says is already forming a presence in Rowan County, Kentucky, where Davis was recently released from jail after prohibiting her office from issuing marriage licenses. Rhodes said in a statement that his position has nothing to do with gay marriage, but rather his conviction that Davis had been illegally detained by the federal judge who held her in contempt for violating multiple court orders.

In a phone call with Jackson County, Kentucky, Sheriff Denny Peyman and other local Oath Keepers activists, Rhodes said that he was on his way to Kentucky to help with the Davis operation. Although the group had originally intended to picket outside the home of the judge who held Davis in contempt, he said, they had changed their plan when she was released on Tuesday. Rhodes said that the Rowan County sheriff should have blocked U.S. Marshals from detaining Davis, but since neither the sheriff nor the state’s governor will do their “job” and “intercede” on behalf of Davis, the Oath Keepers will have to do it instead.

Rhodes claims that Oath Keepers are already on the scene in Kentucky and that more are on the way.

RELATED: During last year’s Bundy Ranch standoff with federal marshals, the Oath Keepers stationed snipers on a nearby overpass.