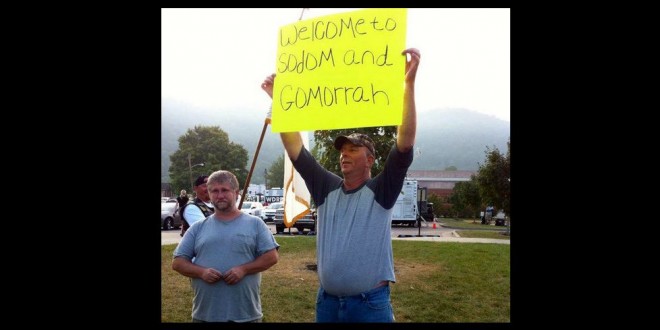 Speaking to reporters before the licenses were issued Friday, Davis’ husband, Joe Davis, said his wife was in good spirits after her first night in jail. Holding a sign that says “Welcome to Sodom and Gomorrah,” Joe Davis said his wife would not resign from her position and would stay in jail for as long as it takes. After sending Davis to jail, Bunning threatened each of her six employees with the same fate if they followed her lead and refused to comply with his order. Five of the six deputy clerks told Bunning they would issue the licenses. The sixth clerk, Kim Davis’ son, was the holdout. At one point, Bunning looked at Davis’ son Nathan and warned him not to interfere with his fellow employees on Friday. The judge said he did not want “any shenanigans,” like the staff closing the office for computer upgrades as they did briefly last week. “That would show a level of disrespect for the court’s order,” Bunning said. He added: “I’m hoping that cooler heads will prevail.” Davis’ son sat stoically as the judge questioned the clerks, some of whom were reluctant. “I don’t really want to, but I will comply with the law,” deputy clerk Melissa Thompson said, weeping while she stood before the packed courtroom. “I’m a preacher’s daughter and this is the hardest thing I’ve ever had to do in my life.” “I don’t hate anybody,” she added. “None of us do.” Bunning indicated Kim Davis would remain in jail at least a week, saying he would revisit his decision after the deputy clerks have had time to comply with his order.