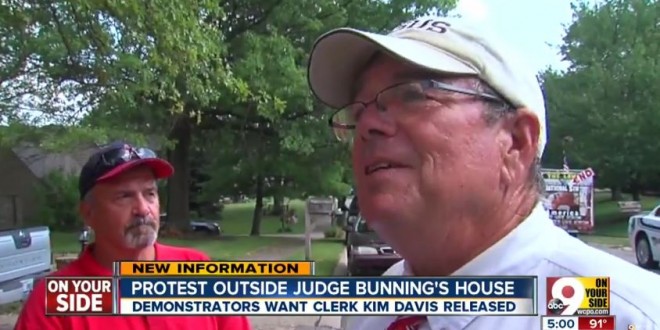 Supporters of a Kentucky county clerk jailed for refusing to issue marriage licenses brought their fight to Northern Kentucky, protesting Monday outside the home of the federal judge who’s jailed her for contempt. About two dozen people, including ministers from Kentucky and North Carolina, demanded Rowan County Clerk Kim Davis be freed, saying she shouldn’t be compelled to issue marriage licenses to same-sex couples because doing so would violate her Christian beliefs. “The Kentucky constitution has never been altered in any way,” the Rev. Flip Benjamin said. “She is guilty of keeping the law, and the judge, David Bunning, has found her in contempt of his court. We are holding Judge Bunning in contempt of almighty God.”

Here’s the flyer that was handed out to Bunning’s neighbors.