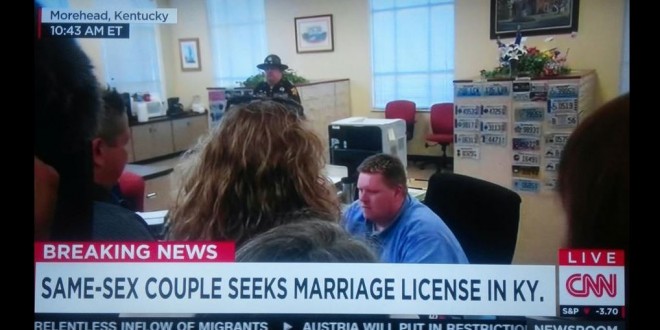 Shannon and Carmen Wampler-Collins were just issued a marriage license by Rowan County Deputy Clerk Brian Mason as Christians INSIDE the office shouted abuse about eternal damnation and “homosexual sodomy.” Buzzfeed reporter Dominic Holden notes that cheers went up for Mason as he processed the license. I’ll add video to this post shortly.

UPDATE: Mason has just gone into Davis’ office to confer because the license apparently won’t print without her name on it. Stand by! VIDEO: Here’s what went on while the couple was being served at the counter.

Previous Fiorina To Trump: Look At This Face [VIDEO]
Next Frothy Mix: Kim Davis Should Follow Her Conscience And Continue Breaking The Law [VIDEO]