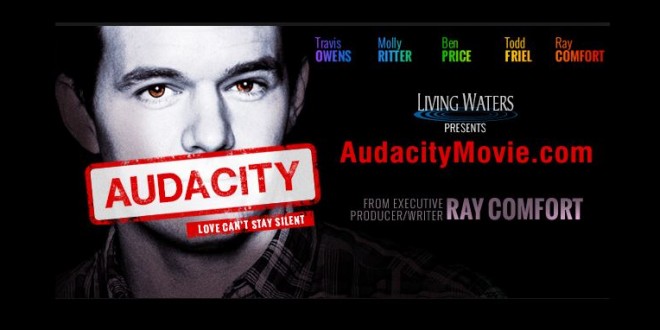 Banana man Ray Comfort is planning to give out thousands of DVDs and t-shirts to promote his latest hate movie at a Kim Davis rally he is planning for Monday. He’ll also be flying a banner plane over the Rowan County Courthouse. Via press release:

In addition to 2,000 DVDs for give-away, Executive Producer Ray Comfort is providing 500 T-shirts and 500 posters for local Christians to wear as they share the film and the message of God’s love with those who surround the courthouse on Monday in anticipation of further actions by Kim Davis. “We want to support Christians who are standing for our God-given freedoms, and we want to empower those who are gathered there in support with materials to share a Gospel witness,” Comfort said. “We have a message for this dying world, and love can’t stay silent!” Also throughout the day on Monday, a four-story air banner in rainbow colors proclaiming #LoveWins and promoting “Audacity” will be flown over the Rowan Country Courthouse. “‘Audacity’ was produced particularly to show that Christians don’t hate homosexuals,” Comfort said. “It is our faith in Christ and our understanding of mankind’s need for a Savior that compels us to share not just with homosexuals, but with everyone, before it’s too late.”

Last month Comfort teamed up with convicted hate bakers Aaron and Melissa Klein to send “love cakes” to ten LGBT groups. Including in that message of love was Comfort’s movie, which warns that you’re all going to hell. Enjoy the cake.

RELATED: In 2006 Comfort became the laughingstock of the internet when he posted a video which declares that the banana is the “atheist’s nightmare” because it fits perfectly into the human hand and is easy to peel, therefore proving that the banana was designed by God. Comfort pulled the video in humiliation after being told that the modern banana is the result of decades of human horticulture and was a seed-filled inedible husk in its original God-designed form. Comfort, not incidentally, is responsible for turning Kirk Cameron to the crazy side.

Previous Oath Keepers Leader: We Will Protect Kim Davis From “Dictatorial Powers” Who Try To Arrest Her
Next Study Links Homophobia With Psychoticism