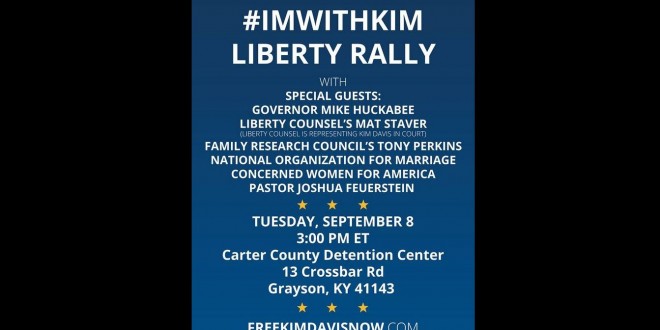 National anti-gay groups are falling over themselves to be seen at Mike Huckabee’s hate rally in support of serial adulterer Kim Davis. This morning press releases were fired out by Liberty Counsel, NOM, the Family Research Council, and the Concernstipated Women.  Here’s some of the FRC’s message:

Our Constitution guarantees Kim Davis the right to practice her faith. It’s called “freedom of religion,” and is the first freedom listed in the Bill of Rights. The couple demanding she issue them a marriage license claims Kim’s exercise of her freedom of religion has imposed a burden on them. Yet they have had many other options for obtaining a license and have, in fact, now gotten one. Apparently Kentucky Governor Steve Beshear is more concerned with imposing a moral and personal burden on Kim Davis than he is with accommodating her deeply-held Christian convictions. So, he is keeping her in jail. This is wrong. We jail criminals, not people of conscience. We penalize wrong-doers, not people who simply decline a service for moral reasons — a service which is readily available in other places. American Christians need to stand with Kim Davis’s right to stand by her religious convictions. You can help by signing our petition below to Kentucky Governor Steve Beshear asking him to issue an accommodation to Kim Davis allowing her to live and work according to her beliefs.

Curiously, Josh Duggar is not listed as attending.