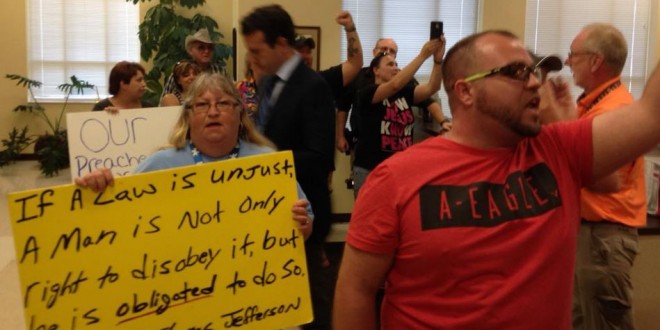 Screaming and chanting has become a regular thing at the office of Kim Davis.  CBS reports:

Protesters once again showed up outside the Rowan County Courthouse on Wednesday morning. When the clerk’s office opened, members of the national media made their way into Kim Davis’s office and asked to speak to her. Nathan Davis, Kim’s son, told the group she wouldn’t be doing any interviews. One couple traveled from Columbus, Ohio to try and get a marriage license. They went inside Davis’s office and their request was denied. There was a crowd of chanting people inside the office at the time. Davis and her deputy clerks are due in federal court Thursday on a motion to hold her in contempt of court. Davis could also face state penalties. Last week, Rowan county attorney Cecil Watkins referred a charge of official misconduct against Davis to the attorney general. Watkins said his office couldn’t prosecute the case because they’re involved in the original lawsuit against Davis and the county.

Thing just got a little heated in the clerk’s office. pic.twitter.com/6Iw5wq9v7P