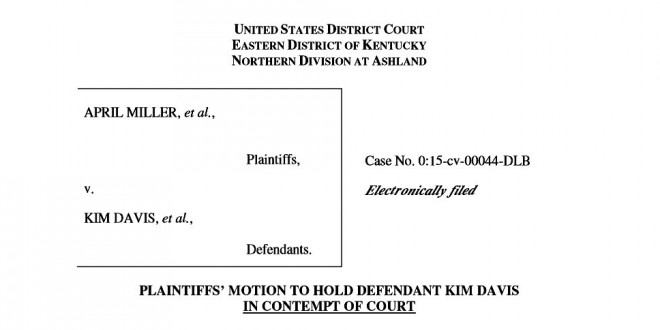 The ACLU has filed a federal motion asking that Kim Davis be cited for contempt of court. The motion declares that the ACLU is not seeking to have Davis arrested. From the motion:

Plaintiffs have established a prima facia case, in that they have shown by sufficient evidence that Defendant Davis, in refusing to grant Plaintiffs Miller and Roberts a marriage license following the U.S. Supreme Court’s denial of her most recent (and final) attempt to stay the August 12, 2015, preliminary injunction, has, in fact, violated a definite and specific order of this Court. Because Davis cannot show either that she is unable to comply with the August 12, 2015, order or that she has taken all reasonable steps to comply, this Court is left with no choice but to hold her in contempt. Plaintiffs do not seek to compel Davis’ compliance through incarceration. Since Defendant Davis continues to collect compensation from the Commonwealth for duties she fails to perform, Plaintiffs urge the the Court to impose financial penalties sufficiently serious and increasingly onerous to compel Davis’ immediate compliance without further delay.

UPDATE: That was fast.

UPDATE II: Details from the AP.

An attorney says the Kentucky clerk who won’t issue marriage licenses and all her deputy clerks have been called for a federal court hearing Thursday morning. Rowan County Attorney Cecil Watkins says the federal court alerted him that a hearing is scheduled for 11 a.m. Thursday in Ashland. Watkins says clerk Kim Davis is summonsed to attend, along with all the deputy clerks who work in her office. Davis stopped issuing licenses in the days after the U.S. Supreme Court legalized gay marriage. A federal judge ordered her to issue them, and an appeals court upheld that decision. Still, she turned away couples. The Supreme Court declined to intervene on Monday, leaving Davis no legal grounds to refuse. But her office turned away several couples Tuesday morning. Davis invoked “God’s authority” in doing so. Attorneys for the two gay couples who originally sued in the case have asked U.S. District Judge David Bunning to hold Davis in contempt. They want Davis punished only with fees, not jail time.