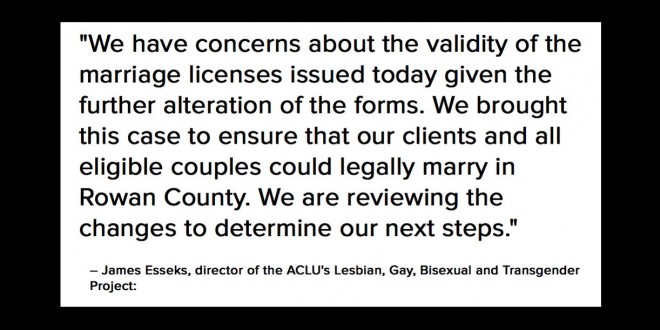 Attorneys representing the couples who sued clerk Kim Davis over her refusal to issue marriage licenses are concerned that the altered forms Davis’ deputies issued could be invalid. Davis, on her first day back at work after a five-day stint in jail, announced Monday that she would not block her deputies from issuing licenses. But she insisted they be edited to exclude her name and her title. The forms, a template issued by the state, now read, “pursuant to federal court order” in the spaces meant to list Davis’ position. Kentucky’s governor and attorney general both said they believe the altered marriage licenses are legal. But lawyers with the American Civil Liberties Union say they “have concerns about the validity,” given the alterations and said they were reviewing their legal options.

The Liberty Counsel appears satisfied for now. From Kim Davis’ lawyer: “The license that went out today does not violate Kim Davis’s conscience. If it’s satisfactory to the court, then I think we will have found that win-win solution that we have been asking for all along.”