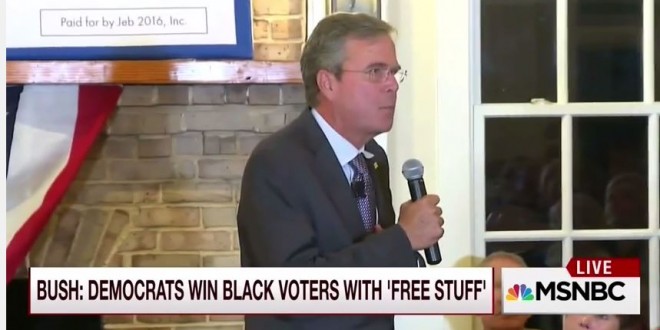 Jeb Bush apparently learned nothing from Mitt Romney’s 2012 debacle. Via the Washington Post:

Jeb Bush said here Thursday night that Republicans can win more African American voters by emphasizing a positive message that does not involve promising “free stuff,” a remark that bore echoes of comments by Mitt Romney that drew criticism in 2012. “Look around this room,” a man told Bush, who spoke to a mostly white crowd. “How many black faces do you see? How are you going to include them and get them to vote for you?” asked the man, who was white. Bush pointed to his record on school choice and said that if Republicans could double their share of the black vote, they would win the swing states of Ohio and Virginia. “Our message is one of hope and aspiration,” he said at the East Cooper Republican Women’s Club annual Shrimp Dinner. “It isn’t one of division and get in line and we’ll take care of you with free stuff. Our message is one that is uplifting — that says you can achieve earned success.”