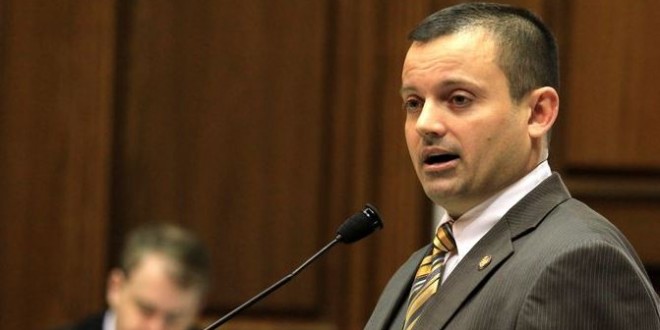 GOP Indiana House Majority Leader Jud McMillin abruptly resigned yesterday after a sex video was sent from his phone to unknown persons. McMillin, one of his state’s most ardent opponents of same-sex marriage, claims that his phone was “stolen in Canada.” Via the Indianapolis Star:

The Star has learned that the surprise resignation came after a sexually explicit video was sent via text message from McMillin’s cell phone. It’s unclear who sent the text or how broadly it was distributed. The Brookville Republican sent a separate text message apologizing to his contacts for “anything offensive” they may have received after he said he lost control of his cell phone. McMillin, whose Facebook page says he is married, did not respond to messages from The Star seeking comment. He said in an emailed statement only that he has “decided the time is right for me to pass the torch and spend more time with my family.” “Now I want to focus all of my attention on making my family’s world a better place,” he said. McMillin said in a text message last week, “My phone was stolen in Canada and out of my control for about 24 hours. I have just been able to reactivate it under my control. Please disregard any messages you received recently. I am truly sorry for anything offensive you may have received.”

McMillin recently led an unsuccessful bid to pass a bill that would require the drug-testing of public assistance recipients. He was one of the co-sponsors of Indiana’s now-infamous RFRA bill. (Tipped by JMG reader Homer)

RELATED: In 2011 The Bilerico Project reported that while a county prosecutor McMillin had become involved with a woman who had a domestic violence case before his office. There was sexting in that scandal as well.