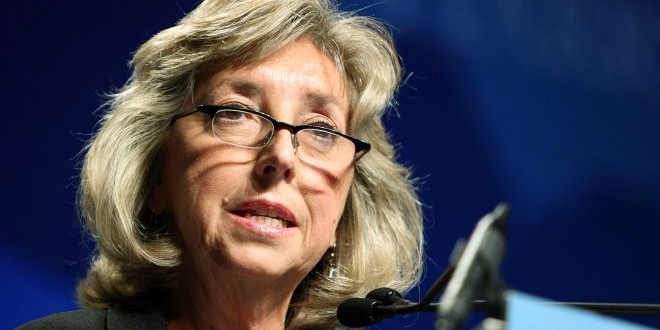 Rep. Dina Titus (photo) calls the vote a slap in the face to gay veterans. Chris Johnson reports at the Washington Blade:

A measure that would have changed federal law to reflect that gay, lesbian and bisexual veterans are entitled to spousal benefits narrowly failed in a House committee on Thursday — thanks in part to a Democrat who voted “present” on the amendment. The House Committee on Veterans Affairs rejected the amendment, which was along the lines of the Veteran Spouses Equal Treatment Act, by a vote of 10-12. The measure would have changed definition of spouse under Title 38 to clarify that not all spouses are persons of a different sex. Rep. Dina TItus (D-Nev.), who sponsors the standalone bill, introduced the measure as an amendment to the American Heroes COLA Act, which seeks generally to increase compensation for veterans as benefits under Title II of the Social Security Act increase. In a statement, Titus said called the vote “a slap in face” to gay and lesbian service members who’ve served the country and their spouses. The measure failed largely along party lines. Eight Democrats and two Republicans — Rep. Mike Coffman (R-Colo.) and Rep. Ryan Costello (R-Pa.) — voted “yes,” but 12 Republicans voted “no.”

Gay and lesbian military members are already entitled to spousal benefits and Titus’ bill would merely update military code to reflect that reality. Rejecting the bill was simply petty.